Valve has approved our launch build and it brings me great pleasure to announce that Space Mercs will be available for purchase on Steam starting with August 2nd 2019 (today)! I’m pressing the big launch button around the hours

The game will be available on Steam for Linux and Windows for the price of $9.99 USD or the regional equivalent!

Join the mercenary group known as the Blue Ravens, start completing missions, hunting down ships and climbing your way up the galactic war ladder facing off against hundreds of enemy combatants all out to get you. Dodge, roll and blast away at your enemies, completing objectives and making a name for yourself as the most badass space pilot the galaxy ever saw.

The game features epic scale battles with more projectiles than stars in the background and rightfully earns the name of “Extreme Arcade Space Combat“. Heck, we might as well put the tag “Bullet Hell” in there somewhere because that’s how it feels when you’re right in the middle of it!

Earn credits, grind missions, upgrade your ship’s internals or weapon systems and take down that battle cruiser before it has a chance to target you!

Thank you for following the development of the game so far! Remember, this is just the beginning – all Bearded Giant Games receive updates (content & bug fixes) for at least a year after release! So hop onto the steam forums or on our discord server and let us know what you think!

Extremely humbled by your devotion and interest, 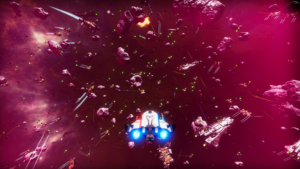 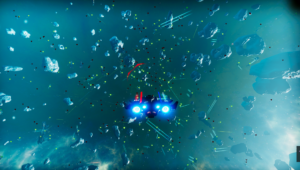 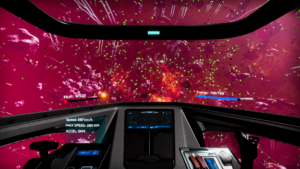