Yesterday one of our Imgur posts went viral! It reached around 95,000 views and 1130 upvotes and was featured on imgur’s front page! A lot of people seemed to like the game’s concept and look and that gave me a huge moral boost. The situation, at the time of posting, looks like this: 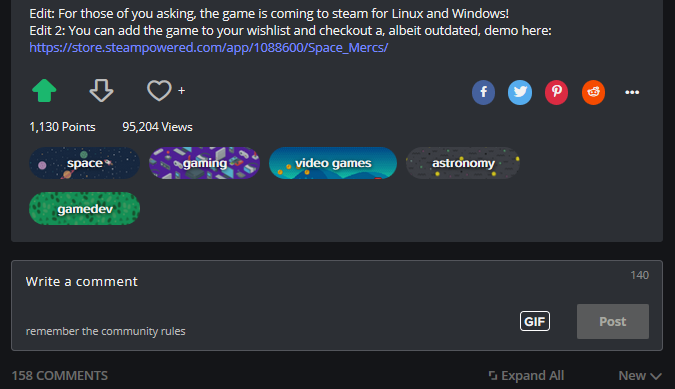 Not bad but what does that mean for the game? Well, Jake Birkett from Grey Alien Games, know for his steam economics posts and Shadow Hand, published a recent article that takes a look at the conversion rates between Steam Wishlists and Week 1 sales. You can read the full post on his patreon, but here are the highlights:

The article goes really in depth and offers a ton of examples of how this applies to the reality of being a game dev on steam, covering a small game (in terms of development time and investment), a medium sized one and a full size production. I really recommend you reading it (and supporting him on patreon – a really worthy investment), but let’s return to our current situation with Space Mercs!

Before the imgur post went viral Space Mercs was sitting in on 189 wishlists after about a week of being present on Steam. To put it into perspective, Ebony Spire, at launch, had about 200 wishlists. So we were already around the same numbers with about a month and a bit more to go before launch. Now let’s apply Jake’s numbers to our current situation:

Not bad but certainly not the best outcome. Now let’s factor in yesterday’s imgur post and see how the math has changed. Out of 95,000 views and 1100 upvotes the game received 85 more wishlists. This put’s it at roughly 274 wishlists. Applying the previous calculations we have:

With yesterday’s post our launch estimates have increased by almost 40%. Not bad at all but this estimates are based on the assumption that NOTHING will change wishlist wise and things stay as they are. Let’s go even further down the rabbit whole and make some assumptions and guesses.

Our worst day in terms of additions on steam was June 3rd where we only 6 added it to their wishlist. Assuming we’re going to hit even more rough patches let’s place our estimates that, at the worst of time, in the days leading to launch, we’re only going to get 4 wishlists. With 43 days remaining till launch that means we can expect a worst case scenario of 172 more wishlists putting Space Mercs at 446 wishlists on launch day. Let’s do the previous calculations again and see what we’re going to face when the game launches:

The game’s development is spread out over 3 months and we’re currently right in the middle of development – and we’re looking at no delays yet! This means that, based on the current estimates, I’ll make roughly 557$ / month in the game’s first year – literary the average salary in my country. But if we are to do the same calculations based on time spent developing the game we would be left with $6690 (our yearly revenue) / 3 (months of development) = $2230 per month of development!

So things aren’t so grim as I was expecting (assuming our worst case scenario doesn’t end being much much worse) however I’m sure I can do better than this. And I want to document this launch and progress towards it so hopefully it might end up helping more indie developers! Jake’s post is an amazing resources that makes a difference between me biting the dust financially, having to get a job, and surviving to make another game so I plan to add to it!

I’ve made a google docs spreadsheet which can be viewed by anyone, it’s public data! I will adjust it as time goes on, update it with the number of wishlists and estimations! By the time we launch we can draw a pretty picture on how accurate the data was so other developers can plan accordingly.

You can view the document here. The “Estimates and Wishfull Thinking” tab contains the current data, by days since this post has gone up. Rows marked with green and a date after them reflect the wishlist data on steam on those dates. Those without a green background are estimated wishlists on that day. At the bottom of the document there are a few fields that display the target wishlists the game need before launch, the current wishlists, the current estimates and the number of wishlists that are missing. It looks like this:

As it stands now the Space Mercs steam page looks like this: 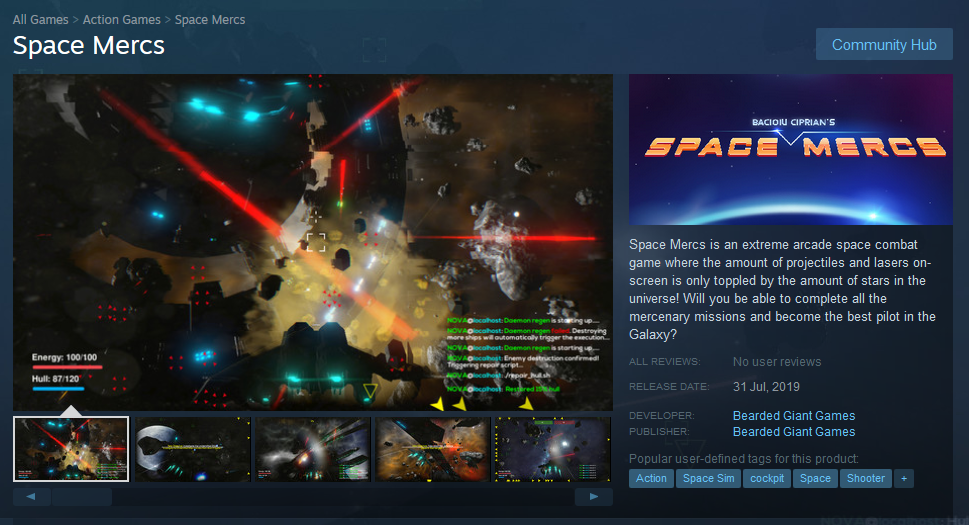 Which reflects the state of the game during the public beta/demo release. Since then the game went through a ton of changes and the current steam page doesn’t reflect the game’s state! For one, this is how the game looks like at the current time and date:

Quite a few things changed since the public demo and the current beta (6)! For one, there’s a new cockpit view and a 3D radar! The main ship has changed, graphics have been tweaked and things are, on average looking way better. So a Steam Page overhaul is a must. The current demo up on steam will also be taken down because it does not reflect the current state of the game.

I’m also missing a trailer which I hope to have finished before launch happens. This should increase the amount of wishlists and sales tremendously, I hope!

For now this is the reality of what I’m facing. You can help make it a bit better in a few ways: