It’s time to roll out the Space Mercs Beta 1 to all our Patreon subscribers and amazing Discord users who do not take turns taking jabs at my under powered development pc! Snark aside this is what to expect in the first beta:

The game was designed to work and look great on the intel HD 4000 series of integrated graphics card. I know a ton of Linux users are having it on their laptops and I want to make sure they are covered. I’ve been testing the game on my 2012-ish Elitebook 2170p 12” laptop and performance is stable with slight dips when huge battles are happening.

So as Beta 1 rolls out all of you get access to one of the game’s missions: A full on frontal assault of a space station together with some wingmen. It’s a bige battle with ~70 ships, a huge titan ship that spawns in and quite a few turrets blasting away at you from the station. It’s a medium-difficulty mission and I want to see how well it runs on your pc’s.

As soon as we get performance out of the way the subsequent beta’s are going to focus on gameplay and feel. In Beta 1 you get to fly and annihilate everything that moves. Bullets are flying EVERYWHERE, from AI space ships, turrets on the station walls and if that’s not enough, a well placed rocket or a miss managed AI ship might send an asteroid hurling towards you. You guys will have to fly in style and use the Boost (SPACE) and roll (Shift + A/D)! Since it’s one of the missions that happen mid-game you already have access to the prototype hull-regeneration script that triggers when you take down an enemy ship so in-between objectives make sure to pew-pew some red targets out of the way.

If performance is settled (aka it runs well on everything) then I’ll unlock more content in Beta 2 and more features. Just know this: your main weapon is randomized at the beginning of the level. Weapon load outs from Beta 2 onward. 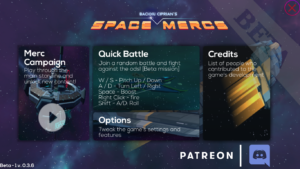 It’s beta but it’s not too early to get the word out about the game. If you’re playing the Beta make sure to press R if you just stumbled on a cool sequence of events. Pressing R will record and export a gif of your last 5 in-game seconds to /home/user/.config/unity3D/BeardedGiantGames/SpaceMercs. Feel free to share it everywhere you want. The same thing goes for twitch streams or youtube videos! Heck send us a link to it when it’s up, I want to see it.

Blow them up, Giants! o7